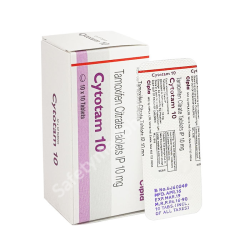 Cytotam 10mg is an antagonist of the estrogen receptor in breast tissue. It has been the standard endocrine (anti-estrogen) therapy for hormone-positive early breast cancer, although aromatase inhibitors have been proposed for postmenopausal women.

Cytotam 10mg is an antagonist of the estrogen receptor in breast tissue. It has been the standard endocrine (anti-estrogen) therapy for hormone-positive early breast cancer, although aromatase inhibitors have been proposed for postmenopausal women.

Tamoxifen was discovered by ICI Pharmaceuticals (now AstraZeneca) and is sold under the trade names Nolvadex, Istubal, and Valodex. However, the drug, even before its patent expiration, was and still is widely referred to by its generic name “tamoxifen.”

Tamoxifen Citrate is used for the treatment and prevention of breast cancer and anovulatory infertility. Tamoxifen Citrate may also be prescribed for other situation as determined by the doctor.Take this medicine in the dose and duration as advised by your doctor. Swallow it as a whole. Do not chew, crush or break it. This tablet may be taken with or without food, but it is better to take it at a fixed time.

How does Cytotam 10 mg work?

Tamoxifen Citrate belongs to the class of drugs called anti-neoplastic agents.  This drug primarily acts by binding to the oestrogen receptor and blocking the action of the oestrogen on mammary epithelial cells. This reduces the growth of the cancer cells. This tablet blocks the effects of estrogen, a natural female hormone in breast tissue which is responsible for breast cancer.

If you miss a dose of Tamoxifen Citrate, please take it immediately once you remember. However, if it is almost time for your next dose, then skip the missed dose and continue with your regular dosing schedule. Do not take a double dose to make up for the missed dose.

Seek emergency medical treatment or contact the doctor in case of an overdose.

The following are the severe side effects and you may require immediate medical attention:

This is not a complete list of side effects and others may occur. Please consult your doctor to know more about other possible side effects.

Suppression of menstruation – This medicine may cause irregular periods in some women. Discuss the risks and benefits with your doctor before taking this medicine.

Venous thromboembolism – This medicine is not recommended for use in patients with a known history of venous thromboembolic events due to an increase in the risk of such events. Discuss the risks and benefits with your doctor before taking this medicine. Replacement with a suitable alternative might be required based on the clinical condition.

Uterus-Endometrial Cancer – This medicine has shown to increase the risk of uterine cancer. Discuss the risks and benefits with your doctor before taking this medicine. Replacement with a suitable alternative might be required based on the clinical condition.

1. Can Cytotam Tablet be used for infertility and breast cancer?

3. Is Nolvadex a SERM /is nolvadex prescription only/ does Nolvadex reduce estrogen?

Nolvadex is a brand name for tamoxifen. Tamoxifen is a selective estrogen receptor modulator (SERM). It is to be used only at the advice and under the supervision of registered medical practitioner. Tamoxifen binds and blocks the estrogen receptors on the surface of breast cells, preventing estrogen from binding to the estrogen-sensitive cancer cells and stops the growth and reproduction of these deadly cells

4. Is Cytotam (Nolvadex) a steroid/ Is Nolvadex a PCT/is Nolvadex an AI/does nolvadex help with acne/does Nolvadex work for/ reverse/ prevent/ reduce gynocomastia/ can I take nolvadex without steroids?

Nolvadex is not a steroid but actually has quite a few applications for steroid-using athletes, the most common use being the prevention of gynecomastia (enlargement of breasts in men). Nolvadex post androgen-cycle therapy (PCT) is usually implemented when supplementation of anabolic androgenic steroids has altered the levels of natural hormone. Nolvadex is not an aromatase inhibitor (AI). There is no indication to use Cytotam without steroids

Cytotam (Nolvadex) is considered safe when used at recommended dosage and duration. It may cause side effects such as liver dysfunction, changes in your periods, hair loss, headaches, weight gain, joint pain, decrease in libido, erectile dysfunction. Side effects such as insomnia, raised blood pressure and dry mouth are not known but may occur with its use

6. Is Nolvadex or Clomid better?

Nolvadex contains tamoxifen, while Clomid contains clomiphene citrate. Both these drugs are selective estrogen receptor modulators (SERMs). Tamoxifen is primarily used to prevent or treat breast cancer, but like clomiphene can be used to induce ovulation in women who are infertile. Studies have shown that one drug does not have advantage over the other, and are equally effective for induction of ovulation.