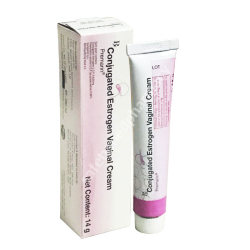 Changes in the skin of the vagina can lead to sex being uncomfortable or painful, and to an increased susceptibility to vaginal or urinary infections, also mild urinary incontinence. Premarin cream provides a topical oestrogen treatment that helps to restore the vaginal tissue, by treating the underlying cause, which reduces symptoms and prevents recurrent infections.

Premarin cream contains conjugated oestrogens, which is a mixture of natural oestrogens isolated exclusively from natural sources. Oestrogen is a steroid hormone produced by the ovaries that binds to specific receptors inside oestrogen-responsive cells and stimulates them to make proteins involved in producing secondary sexual characteristics, including thickening of the vaginal wall and increasing vaginal secretion.

When Premarin cream is inserted into the vagina, oestrogen is slowly released and absorbed into the vaginal skin layer where it reverses changes in the vagina by stimulating thickening of the skin, reducing inflammation and restoring the physiological pH and normal microflora (the “good” bacteria that normally live in the skin and increases resistance to infection with other bacteria that cause vaginal or urinary infections).

The restoring effect of Premarin cream reduces symptoms of atrophic vaginitis which can be maintained with continued use.

PREMARIN therapy is contraindicated in individuals with any of the following conditions:

This medicine may be harmful if swallowed. If someone has overdosed and has serious symptoms such as passing out or trouble breathing. Canada residents can call a provincial poison control center. Symptoms of overdose may include: severe nausea/vomiting, unusual vaginal bleeding.

Nausea/vomiting, bloating, breast tenderness, headache, or weight changes may occur. If any of these effects persist or worsen, tell your doctor or pharmacist promptly.

Remember that your doctor has prescribed this medication because he or she has judged that the benefit to you is greater than the risk of side effects. Many people using this medication do not have serious

1.Can Premarin Vaginal Cream be used in the treatment of osteoporosis?

Yes. Premarin Vaginal Cream can be used in the treatment of osteoporosis when recommended by the doctor.

2.Can I undergo metyrapone test while using Premarin Vaginal Cream?

No. It is advisable not to use PREMARIN VAGINAL Cream as it alters the test result. However, please consult your doctor.

3.Is it safe to use Premarin Vaginal Cream in patients having a history of deep vein thrombosis?

No. It is unsafe to use Premarin Vaginal Cream in patients having a history of deep vein thrombosis, as it increases the risk of blood clot.

4.What precautions do I need to take while using Premarin Vaginal Cream?